Each solar report tries to convey the excitement, thanksgiving, and praise that resulted from each delivery trip. This report concentrates on just one of those trips: the journey to El Salvador and Costa Rica made by Luis Melendez and Brandi Kendall. Luis recently returned to the United States from serving as a missionary in Costa Rica. Brandi currently serves as SIBI’s Dean of International Studies for Asia.

Covering El Salvador from East to West, by Luis Melendez

Brandi Kendall and I traveled with 240 solar players to El Salvador, from the 20th to the 25th of September. Thanks to God, we had no problem at customs. In El Salvador the customs process is random. They ask arriving travelers to push a button. If a red light turns on they check your luggage, but if a green light turns on they let you go without checking your luggage. When I was passing through customs, they asked me to push the button, and for some reason after I pushed the button it took two or three seconds for the light to turn on. Fortunately, a green light eventually turned on so they let me go without questioning or incident! God be praised!

We then distributed solar players at four events. First, on Friday we gathered with about 60 preachers from the central part of the country. We met in a church building at La Miramonte, San Salvador. Second, we went to the eastern part of the country to San Miguel. On Saturday we met with over 100 church members and preachers from the surrounding cities and towns. Later that day we distributed solar players to 12 Bible students in Santa Tecla, San Salvador. Finally, on Sunday we gathered together with over 60 Christians on the western part of the country in Ahuachapán.

This trip was intense and very successful. We were able to bless about 70 of the 100 El Salvadorian Iglesias de Cristo congregations with solar players. Praise God!

I went to Costa Rica on the 28th for a five-day trip. I brought 80 solar players. I arrived at 8:30 p.m. at the Juan Santamaria International Airport. As I was heading out with my luggage to pass through customs, knowing that customs officers can be a little difficult, I prayed to God for a good outcome. Two customs officers asked me to open my luggage, and right away they wanted to know its value. I told them it was a donation to Christians in Costa Rica from the Sunset International Bible Institute. I showed them the letter to prove it, but they were not convinced. They then asked me for the church where I was going to take the solar players. They wanted to know its name and location, so I told them. It turned out that they were from Palmares (the city where I had planted the congregation) and were familiar with the church and its location, so they let me go, tax-exempt. Certainly this was God’s providence in action!

Thanks to God, I was able to give away all 80 solar players to the Christians in Costa Rica. About 15 congregations and a Bible institute were blessed with these gifts. Among those who received a solar player were preachers, Bible students, church leaders, active members, the old and the young, men and women. Those who received a solar player were very excited and thankful. It was rewarding to see their faces full of gratitude and enthusiasm! They promised to use it for the purpose intended and to bring glory to God. All of them sent greetings and thanks to SIBI. Praise God! I personally enjoyed serving in this noble cause.
-Luis Melendez 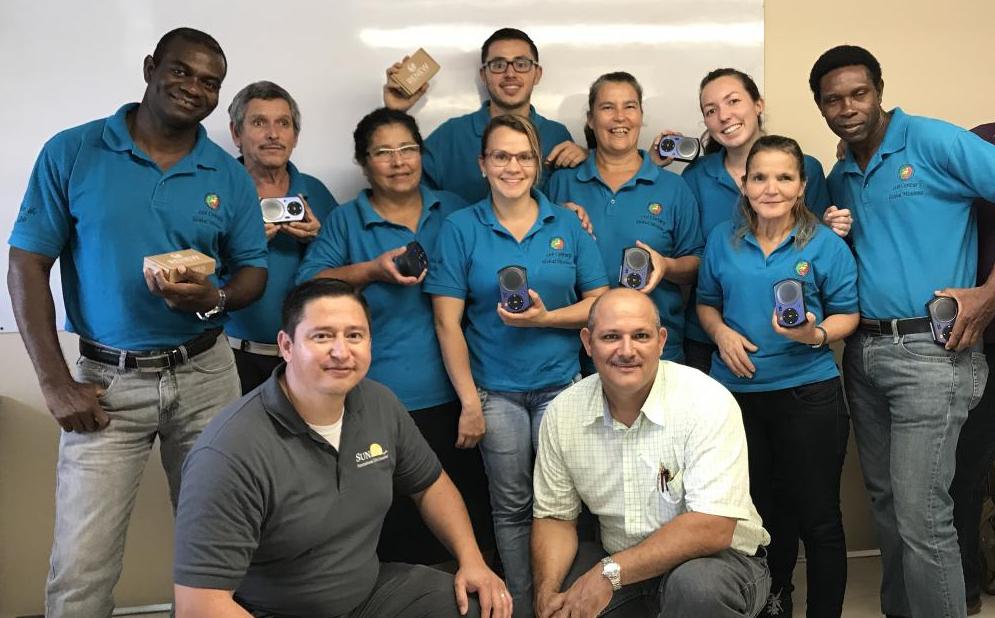 There remains only $25,000 left to raise before the $1,500,000 goal is complete. This will complete the 3,000 solar players for Phase III that are continuing to be delivered. Upcoming deliveries are scheduled in November for Ecuador, Cuba and Bolivia. Please continue to help us as we finish this goal and look forward to the next Phase of the Solar Event.