Tim Burow and I recently returned from a three week trip to Ghana, West Africa, where we distributed 250 solar players and conducted Bible seminars.  Ghana is a little smaller in land area than the state of Texas.  We traversed portions of the southern area, then we traveled north up the eastern side and then west across part of the northern area and then back south to our home base in Swedru.  We traveled nearly 80 hours during our three week trip. 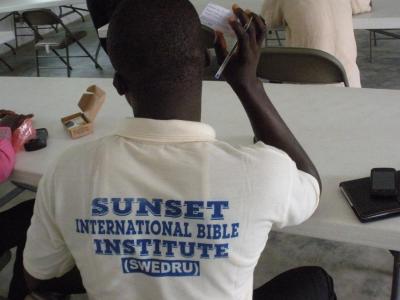 Ghana is a very receptive field.  There are an estimated 300,000 members of the church of Christ in Ghana.  Sunset International Bible Institute has one of its sixty-eight international schools in Swedru, Ghana (in the south) directed by David Essuman, an SIBI graduate.  This school was begun in 2001, and has been a very effective tool in training people for a life time of ministry. During our travels, we distributed solar players in eight different cities.  Three of those eight cities have ministry training schools in addition to our school in Swedru.  The solar players will be a great asset to those training for ministry as well as to those already involved in ministry.

One of those three training schools is the Volta School of Evangelism in Ho (in southeast corner of Ghana).  They are in the process of planting a new congregation in a village about 15 miles north of Ho.  Tim and I had the privilege of teaching a short course to their 1st and 2nd level students, and to participate in the new church planting effort.  Tim preached the first Sunday a.m. sermon at this new congregation, and we received great support from the village chief.  He was very pleased to have the church involved in his community.  The students at this school were very excited to have their “new tool” (the solar player) as an addition to their evangelistic training to help them teach people the gospel.

In the city of Kumasi, we met with the President of the Ghana Bible College.  After our meeting, we followed him out of the huge city to the highway going south.  As we were preparing to departed, he got out of his car and said, “I’ve been thinking about different ways we could use these solar players.  I think they would be a great tool for broadcasting sound biblical teaching on the radio.”  What a great idea!  The Ghana Bible College is having a homecoming during the second week of October.  They are expecting 1,000 people to attend.  We are sending three staff members with as many solar players as they can carry to distribute to key leaders at this homecoming event.

Everywhere we went, we were met by willing brethren ready to put the new solar players to work.  We could tell that many people had caught the vision of using this wonderful new tool to teach people the precious gospel of Christ.